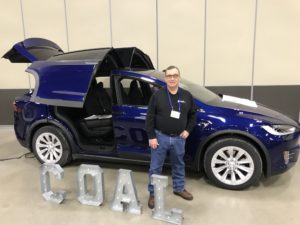 FEB 25, 2019 – I grew up with the internal combustion engine. When I learned to drive in high school, the price of a gallon of gasoline was 70 cents. Now that I’m nearing my 60th birthday, the price is $2.10 a gallon. I’ve seen it as high as $4.00 a gallon but that was before horizontal drilling and the exploitation of the Bakken Shale in western North Dakota.

To say I’m satisfied with the status quo would be an understatement. I normally drive a 2006 Dodge Neon that has been described by my brother-in-law as “old fashioned.” It has power steering, a radio and an automatic transmission so it seems modern enough for me. Also, I really only drive it to work and back or the occasional trip to the grocery store.

So when I was told last Friday that I would be driving a 2018 all-electric Tesla Model X for a week, I felt a few jitters run up my spine, but then I thought, “Hey, you’ve driven an electric car before….yeah, a golf cart…many times.”

Well, the Tesla is a little more sophisticated – and bigger – than a golf cart. There’s a little fellow under the hood named “Otto.” His last name is “Pilot.” And he can drive the car all by himself on the interstate from Bismarck to Mandan.

He’s a little too “swervy” for my nerves. It puts me in mind of the way a sitting car on an Amtrak will sway when you are riding the rails. But I had to try it.

There are lots of things to try on the Tesla. I downloaded an app to my phone that allows me to warm up the interior of the car while I’m still inside the office working. The app also tells me how much juice the car is using while warming up the interior of the car. Since North Dakota is right now in the middle of a cold snap, I can’t decide what feature I like most…the one that warms up the car or the one that shows how much electricity is being consumed.

If this was spring or fall, the car could probably make it about 300 miles between charges, but since its winter, heating up the interior is certainly decreasing the miles it can travel.

Right now, the car is plugged into a charging station at work, so I’m not too worried about the electric load. If I were at home, I’d be a little more worried, but I still know that electricity is a good bargain in North Dakota – partly because about 70 percent of it comes from North Dakota-mined lignite coal. Lignite is an affordable fuel. That’s why we have seven lignite-based power plants that generate approximately 4,000 megawatts…or enough power for more than 2 million homes.

My employer, the Lignite Energy Council, is leasing the Tesla for the next three years and allowing its employees to try it out and see if personal ownership of an all-electric vehicle would be right for them.

Well, for me, the Tesla – or another brand of an all-electric car — would be a perfect second car as I only use my Neon for short trips. The Tesla specifically worked great in the cold weather and handled well in the challenging road conditions. Of course, we northerners know that the secret to getting around in the winter is our tires, and the Tesla has new tires with plenty of tread. The Tesla also has lots of power and accelerates well.

Yesterday, we took the Tesla to church and as we were talking with another couple, the husband asked, “Who makes the Tesla?”

I replied that the car company is called Tesla. This was hard for him to comprehend because almost every car in the church parking lot is made by either Chevrolet or Ford. So driving an all-electric vehicle takes a little getting used to…but the for the people who like to try new things, I think the Tesla will be just fine.

In the future when our grandchildren are adults, who knows, maybe they’ll be wondering what a Chevrolet and a Ford were. People of my generation might be seeing the future before our eyes and we could be the last to recognize it.

Electric vehicles can be amazing, but they are still a work in progress

My Approach for Driving the Tesla in Cold Weather

Putting the Tesla to the long-distance test