June 25, 2020 – (by Jason Bohrer) Now that we are well into summer, I hitched up my boat to the Tesla and decided to see what would happen.  Keep in mind the Tesla sits pretty low, so I got one of those drop-hitches and flipped it over, so it raised the attachment point by around 5 or 6 inches.  That meant the boat tongue was about the same distance from the ground as it would be on the Suburban with the drop hitch. Hooking up a boat or trailer nowadays is so much easier than it was 30 years ago—the kids these days don’t know how well with their back up cameras. But the Tesla is even easier.  Before I knew it I had the boat attached.

My boat is a Sea Doo Speedster 200, which is a 20-foot jet boat that, combined with its trailer, clocks in at around 4100 pounds.  Add gas, gear and Coke Zero, and it goes up from there.  So although I HAVE towed this boat short distances with my wife’s Jeep Wrangler (4-door version) it’s really full-size pickup territory. 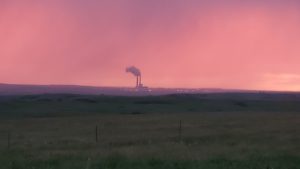 The lake I usually go to is Lake Nelson, which is adjacent to (and heated by) Minnkota’s Young Station and is almost exactly 40 miles away from my house. We were running a little behind schedule so I glanced at my mileage and saw that I had 174 miles of estimated range and thought, “Well, we will see what happens!”

What happens is that pulling a huge boat runs your battery down pretty quick, but we’ll get to that part in a minute.  The actual experience of towing is great. The boat tracks perfectly, the car accelerates great and I say without a doubt the experience of towing the boat is better in the Tesla than in the Suburban, at least up to 65mph.  I don’t know why, but towing the boat for the first time with the Tesla just made me a little nervous, so I didn’t get it up to 75 like I would in the truck although it clearly could have pulled it that fast. Stopping was much easier than stopping in the Suburban, because the regenerative breaking really works in your favor.  Exiting the interstate with the Suburban and boat, I can feel the boat pushing me around a little, and can feel the extra weight when slowing down.  Not so with the Tesla.  We stopped without any drama at all.

But we did have drama, since I should have topped the car off at Bismarck’s newly energized 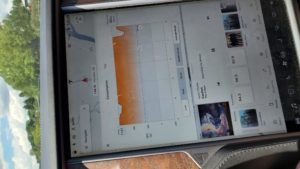 Superchargers.  But I didn’t, and I watched the estimated range tick off much more quickly than normal.  By the time I got to Lake Nelson—again, that’s 40 miles—I had consumed 100 miles of “estimated range”, leaving me with only 70 miles for the return trip.

At the boat launch, I did have some trouble, but it was related to my trailer and not the car.  My trailer has those “inertia brakes” or “surge brakes” and for whatever reason, when I was backing up the trailer they kept kicking in.  Before we began backing down, (and this is awesome, btw) I hit the “raise suspension” button to raise the car up as far as it would go, to keep the car out of the water as much as possible, so I don’t know if I should have waited to do that until I was actually on the boat ramp or not.  The other thing about backing a boat in with a Tesla is that the whole place starts watching you.  And as anyone knows who has ever backed up a trailer, what you really want when backing up with a trailer or a boat is a million people watching you.  It calms the nerves the way a ticking time bomb might.

But nonetheless, we got it into the water, and because we had raised the car up so high almost no part of the actual car body got wet.  I was a little leery of backing an electric car into a body of water, but read online that it was possible and I had no issues.

So how did I get home?  Well, we still had 70 miles of range so after we were done for the day we just left the boat up at the lake and came back and got it.  That was really my fault, since I wouldn’t leave home with a quarter tank of gas under similar circumstances, so that was just user error.

All in all, this was a huge success.  We go to the lake quite a bit, and you can imagine 80 miles three or four times a week in a Suburban adding up in gas costs, so the Tesla is going to be very popular this summer. I’ll just be sure to charge it up all the way next time.

Tesla, COVID-19 and Diver Down